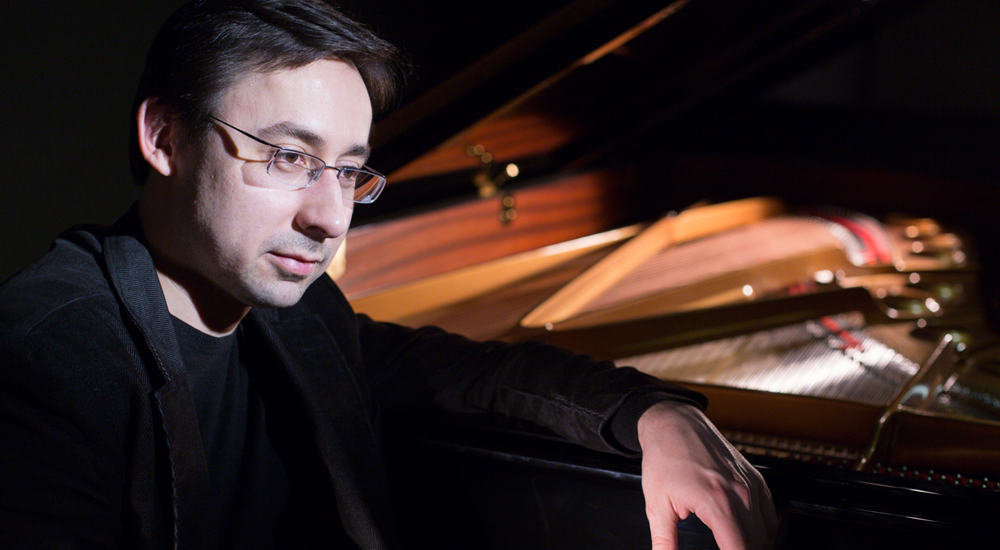 Called the “Van Cliburn of today” by the BBC, pianist Alexander Kobrin has placed himself at the forefront of today’s performing musicians. His prize winning performances have been praised for their brilliant technique, musicality, and emotional engagement with the audience. The New York Times has written the Mr. Kobrin was a “fastidious guide” to Schumann’s “otherworldly visions, pointing out hunters, flowers, haunted corners and friendly bowers, all captured in richly characterized vignettes.” “This was a performance that will be revered and remembered as a landmark of the regeneration of exceptional classical music in Central New York.”-critic wrote after Mr. Kobrin’s performance of Second Piano Concerto by Johannes Brahms with Syracuse Symphony in Syracuse,NY.

He has appeared in recital at major halls worldwide, including the Louvre Auditorium and Salle Cortot in Paris, Albert Hall and Wigmore Hall in London, Munich Herkulesaal and Berliner Filarmonia Hall in Germany, the Kennedy Centre in Washington, Avery Fisher Hall in New York, the Great Hall at the Moscow Conservatoire, Sheung Wan Civic Centre in Hong Kong, as well as Sala Verdi in Milan and many others. Other past performances have include recitals at Bass Hall for the Cliburn Series, the Washington Performing Arts Society, La Roque d’Antheron, the Ravinia Festival, the Beethoven Easter Festival, Busoni Festival , the renowned Klavier-Festival Ruhr, the Festival Musique dans le Grésivaudan ,the International Keyboard Institute & Festival, annual concert tours in Japan, China and Taiwan. Mr. Kobrin has also performed a two-piano recital in collaboration with his friend of many years, French pianist Frederic d’Oria Nicolas at Salle Gaveau, Paris which was broadcast by both Mezzo and ARTE.

Mr. Kobrin has released recordings on the Harmonia Mundi, Quartz, and Centaur labels, covering a wide swath of the piano literature. Gramophone Magazine raved about his Cliburn Competition release on Harmonia Mundi, writing that “in [Rachmaninoff’s] Second Sonata (played in the 1931 revision), despite fire-storms of virtuosity, there is always room for everything to tell and Kobrin achieves a hypnotic sense of the music’s dark necromancy.”

Mr. Kobrin was born in 1980 in Moscow. At the age of five, he was enrolled in the world-famous Gnessin Special School of Music after which he attended the prestigious Moscow Tchaikovsky Conservatoire. His teachers have included renowned professors Tatiana Zelikman and Lev Naumov.