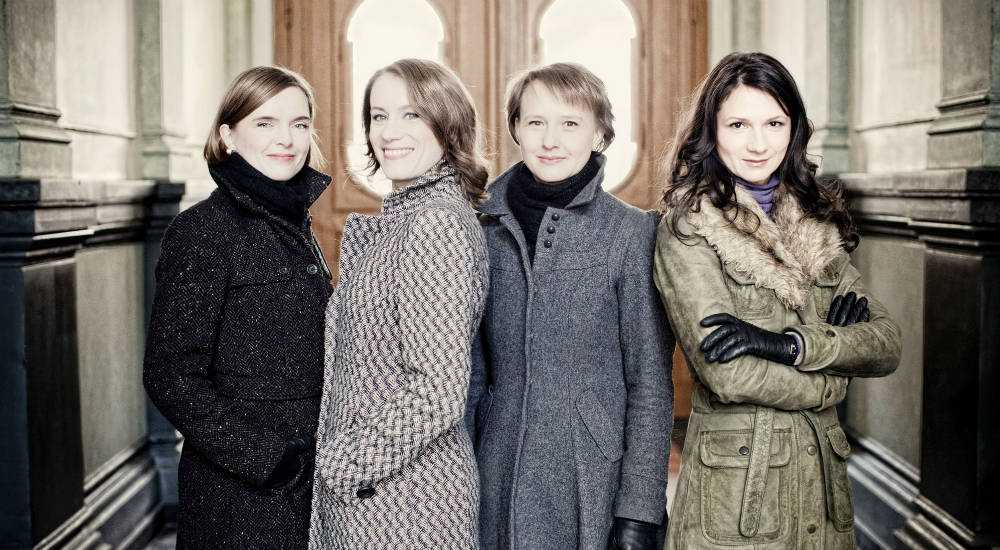 In the seasons of 2021/22 the Klenke Quartet celebrated its 30 year anniversary with an unchanged cast. Annegret Klenke (1st violin), Beate Hartmann (2nd violin), Yvonne Uhlemann (viola) und Ruth Kaltenhäuser (violoncello) have established themselves internationally as one of the most significant German string quartets and are renown as „one of the most distinguished European formations“ (Gewandhaus-Magazin). The four musicians are all graduates of the Franz Liszt College of Music in Weimar. Their distinctive artistic characters were formed in working with Norbert Brainin (Amadeus Quartet), Ulrich Beetz (Abegg Trio), Harald Schoneweg (Cherubini Quartet), and Sándor Devich (Bártok Quartet).

Depth, vocality and intimate musical play, paired with a strong dramatic program and a tonal intensity down to the faintest notes are the basis of the characterization of the Klenke Quartet.

Multiple CD-recordings document the extensive work of the Klenke Quartet and have been awarded prizes such as the Choc du Mois, the Midem Classical Award and repeatedly with the Supersonic Award. In addition, the impressive live recordings of the instrumental passion „Die sieben letzten Worte unseres Erlösers am Kreuze“ by Joseph Haydn (Berlin Classics, 2008),  the complete performance of the Tchaikovsky string quartets (2010) and a Schubert quartet performance (2015), the quartet dedicated themselves to the works of Mozart. Their complete performance of the ten famous string quartets of Wolfgang Amadeus Mozart (Hänssler) was published between 2004 and 2010.

In their newest publication (Accentus Music), they present the complete performance of Mozart’s string quartets with Haral Schoneweg (Cherubini Quartet) and was the recording of the week with the BBC (magazine and radio). The editor of the MDR, Martin Hoffmeister gave a verdict that, „…for me, this recording is the absolute reference.“
In 2021, their recording of the Mozart Horn and Clarinet quintets in cooperation with Stephan Katte (horn) and Nicola Jürgensen (clarinet) will be published. All their recordings (except Haydn 2008) were realized in cooperation with SWR in Baden-Baden.

The cooperation with others is an important inspiration for the ensemble. Therefore, the quartet can be seen together with, among others,  Martin Stadtfeld, Matthias Kirschnereit as well as the Auryn- and Vogler-Quartet.
Together with the actor Axel Milberg, the Klenke Quartet realized complex and atmospheric concert readings. Their exquisite „Auftakt“ concert series in Weimar is understood to be a homage to their founding there.

The past years have led the quartet to perform in Iran, in Japan, Austria, Italy, Slovenia, the Netherlands and in multiple German chamber music festivals. A planned tour of Israel in the autumn of 2020 turned, with the support of the Goethe institute, into an exciting digital cooperation with the Israeli pianist Ishay Shaer, whose arrangement of Beehoven’s Rondo for Piano and Orchestra WoO 6 was realized together by the artists.

For a long time, the ensemble has been supporting new music and, for this, is supported in turn by the Mamlok-foundation. In 2021 the Klenke Quartet will present a commissioned piece from composer Helmut Schmidinger titled „Beethoven Reflections“ and in 2022 the first performance in Germany of the Detlef Glanert string quartet.

Especially important to the four musicians is the work with children; using children’s and family programs to encourage a young generation to find their enthusiasm for chamber music. Children’s programs have been realized by the Klenke Quartett, among others, in the Tonhalle Düsseldorf, the Cologne Philharmonic, the Luxemburg Philharmonic, the Hamburg Laeiszhall and the Vienna concert house.

„A quartet playing can be such an enticing occasion.“