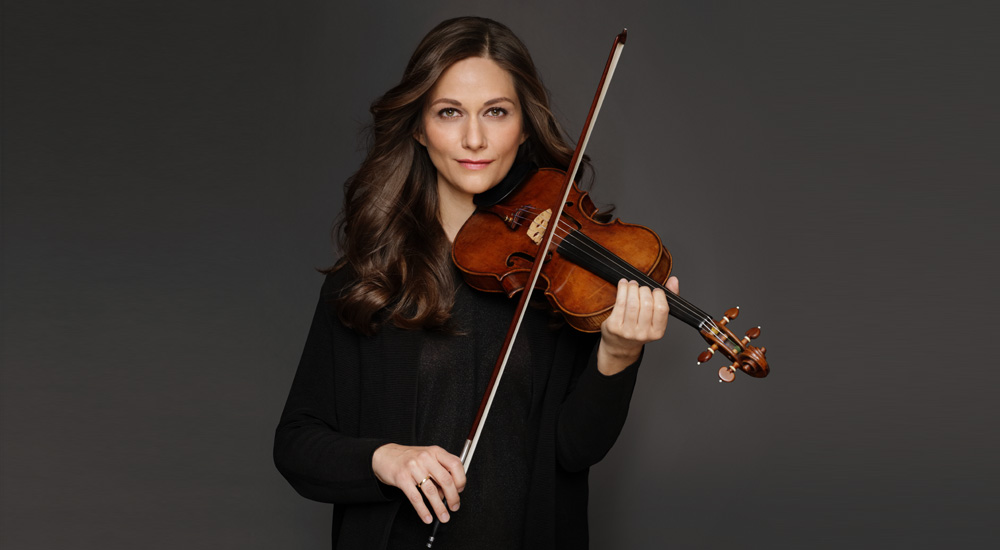 “Today, Lena Neudauer is sought after artist, who, through the clarity and power, the grace and soul of her violin playing, thrills an international audience.”
Focus, 2018

Lena Neudauer, born 1984 in Munich, Germany, began playing the violin at the age of three and at the age of ten she performed her first concert with an orchestra. As a young student, she entered the Mozarteum University in Salzburg in a class led by Helmut Zehetmair at age eleven. She then continued under the instruction of Thomas Zehetmair and later on with Christoph Poppen. Through the years she also received significant ideas from Felix Andrievsky, Ana Chumachenco, Midori Goto, Nobuko Imai and Seiji Ozawa.
In 1999, Neudauer sparked sensation at the Leopold Mozart International Competition in Augsburg, where she not only won 1st prize, but was also awarded the Mozart Prize, Richard Strauss Prize for the best interpretation of Richard Strauss’ Violin Concerto and the Audience Prize.

For some years now, Lena Neudauer has also dedicated herself to the performance of contemporary music and has worked, amongst others, with the Ensemble Intercontemporain and Pierre Boulez as also with the Österreichische Ensemble für Neue Musik (OENM). In her artistic activities, chamber music plays a significant role, which together with her solistic performances, also led her to perform in Festivals like the Mozart Week in Salzburg, Mecklenburg-Vorpommern Festival, Schleswig-Holstein Music Festival, Gaia Chamber Music Festival Thun, the Festival Musical Olympus in St. Petersburg, Chopin and his Europe Festival Waschau, Settimane Musicali in Ascona and the Flandern Festival. Currently she is working together with artists such as Julian Steckel, Matthias Kirschnereit, Julia Fischer, Herbert Schuch, Nils Mönkemeyer, Paul Rivinius, William Youn and Lauma Skride.
In a quintet together with Silke Avenhaus, Wen Xiao Zheng, Danjulo Ishizaka and Rick Stoijn, Schuberts Forellen Quintett is combined with a newly composed piece  „Ein Forellenteich“, a group project by  Ferran Cruixent, Osmo Tapio Räihälä, Gerald Resch, Johannes Schachtner, and Dejan Lazic. This project is published on CD by CAvi.

Her debut CD on the Hänssler Classic label appeared in May 2010, presenting the complete works for violin and orchestra by Robert Schumann together with the German Radio Philharmonic Orchestra Saarbrücken Kaiserslautern under Pablo Gonzalez. The CD was awarded the prestigious International Classical Music Award (ICMA) for the best concerto recording 2011. In 2013, she released a Ravel chamber music CD together with Paul Rivinius (Piano) and Julian Steckel (Cello). Lena Neudauer’s recording with the German Radio Philharmonic Orchestra Saarbrücken (2014) was dedicated to Mozart’s violin concertos including cadenzas of the soloist. 2018 her recording of Mendelssohn concerto d minor and double concerto (with Matthias Kirschnereit) was praised by Fono Forum as “fresh and spritely”.
Her latest CD (cpo 2019) with Beethoven violin concerto op. 61 and Romanzen 1&2 under Marcus Bosch with Cappella Aquileia was praised as reference recording (Pizzicato, Fono Forum, Crescendo) and has been awarded the Supersonic prize. “There is no doubt that Lena Neudauer is an interpreter with a strong personality, technically brilliant, who fully respects the spirit of this work.” (Pizzicato)

In 2010, Lena Neudauer (at the age of 26) was appointed Professor for violin at the Saar University of Music. Since autumn 2016 she has a professorship at the University of Music and Performing Arts Munich. She plays on a Lorenzo Guadagnini from 1743 and a Philipp Augustin from 2015.